It’s the final of The Great British Bake Off tonight and what better way to celebrate than with a tray of delicious blondies! Actually I’ve been craving blondies all month – it’s just a happy accident that I’ve finally made them today!

Always good to sneak a bit of veg into your bakes too, although I’m not sure if it still technically counts towards your five a day, but we can try eh?

Pumpkin is obviously also perfect for this time of year as they are flippin’ everywhere! If you are carving a pumpkin then you can use the discarded seeds and roast your own from scratch and use the flesh to make your own pumpkin puree!

I’m a little short on time this year so won’t be doing any of the above haha! Also we’re not putting a pumpkin out as Delilah is such a light sleeper, we don’t want to encourage any groups of excitable children shouting “TRICK OR TREAT” at the door just after we’ve got her to sleep.

However, if I was carving a pumpkin I would have made fresh puree and toasted my own seeds like Jamie does here, but I also have some homemade pumpkin puree in the freezer so yeah, time saving all round this year!

This recipe is adapted from the always reliable Felicity Cloak and her ‘How to cook the perfect…’ column in the guardian. 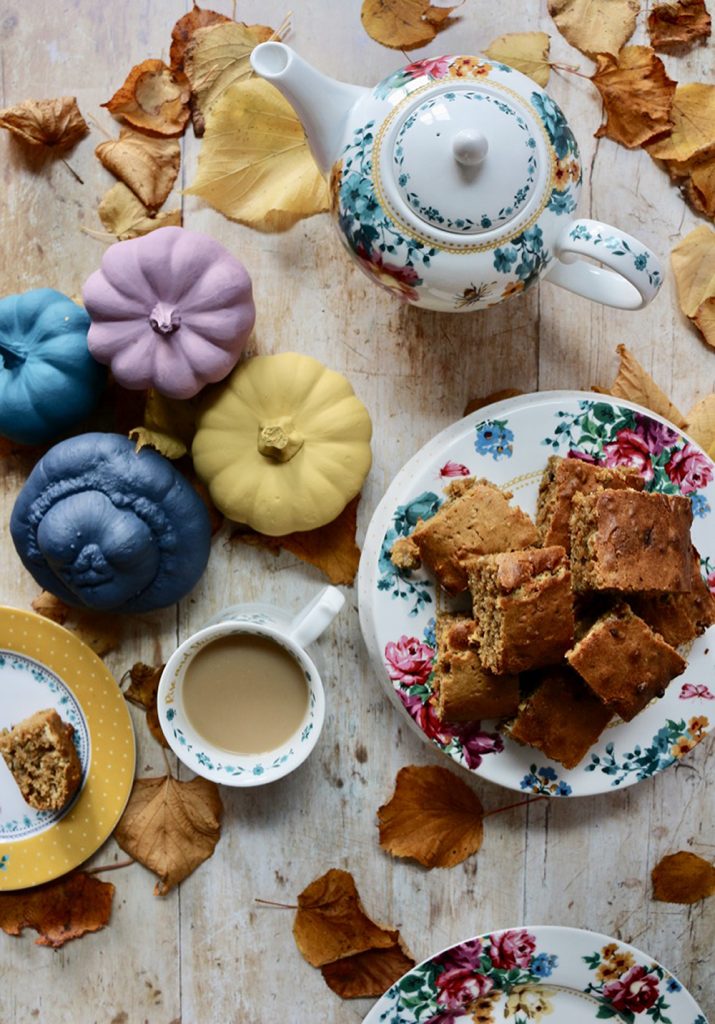 Melt the butter in a wide, light-coloured pan over a medium-low heat, swirling to help it along. Once the foam has died down, watch it like a hawk; as soon as the solids at the bottom turn from white to toasty brown and the butter smells almost nutty, tip into a bowl to cool until barely warm.

Heat the oven to 200C/400F/gas mark six and grease a square baking tin roughly 20cm in size. Sift together the flour, baking powder, salt and spices in a large mixing bowl. Stir the sugars into the cooled butter, then add the pumpkin puree, eggs and vanilla. Roughly chop the pumpkin seeds now they’re cool. Gently fold the wet ingredients into the flour, along with the white chocolate and seeds, until just combined – don’t overmix.

Pour into the tin and bake for around 25 minutes, until set on top. Meanwhile, prepare a shallow sink of iced water; when the blondies are cooked, plunge in the tin, being careful not to drown the blondies, and allow to cool.

Cut into squares and eat! 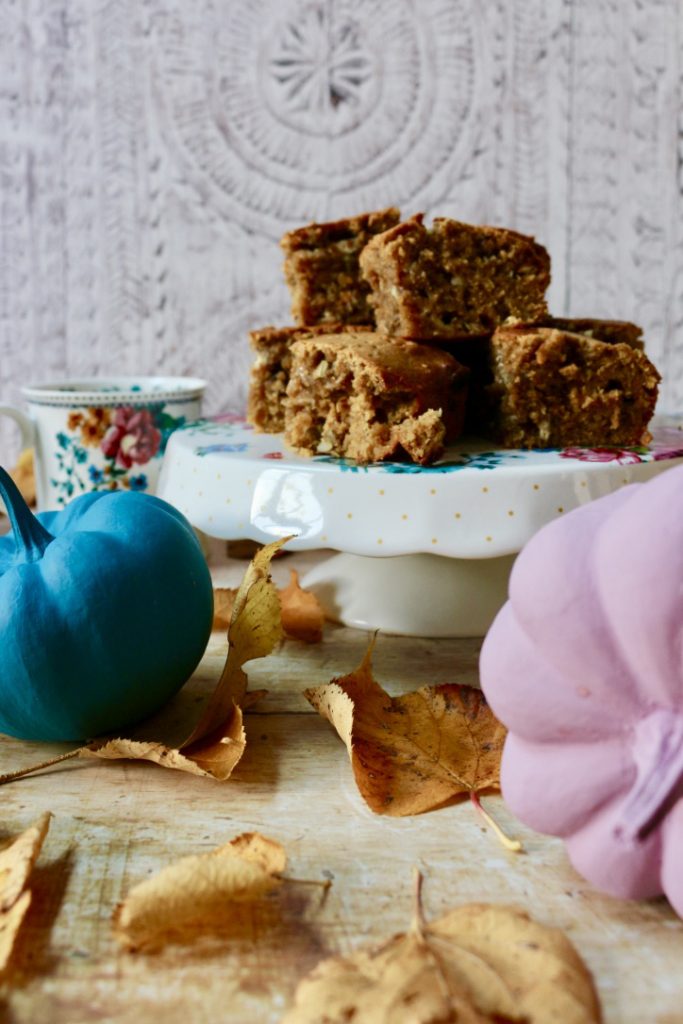 A little (serious) note on chocolate for those that are interested –

I used white chocolate chips from Hotel Chocolat which are lovely and not too sugary, it’s a little expensive but I’m on a bit of a ‘buy less and buy well’ drive with chocolate. I’ve read a lot of articles and research lately that’s prompted this – firstly because of the mass deforestation that’s happening to make way for palm oil plantations in rainforests, which is pushing some species (like the gorgeous Orangutan) to distinction; did you know the makers of Cadbury’s stand accused of buying palm oil from farmers that are some of the worst responsible for mass rainforest destruction? Google ‘Cadburys palm oil’ to see a worrying amount of articles on this. And secondly because I’ve also read a lot recently about how child labour, child trafficking and slavery is still a big problem in cocoa farms, even though there are supposed to be laws in place to prevent it. More on that here – https://foodispower.org/human-labor-slavery/slavery-chocolate/

We’re no longer buying Cadbury’s (much to Matts fury… bye-bye beloved crunchie bar) and although we could still make a lot of improvements towards living a more sustainable life, this felt like an important and easy decision. I hope you have found this interesting and not preachy! 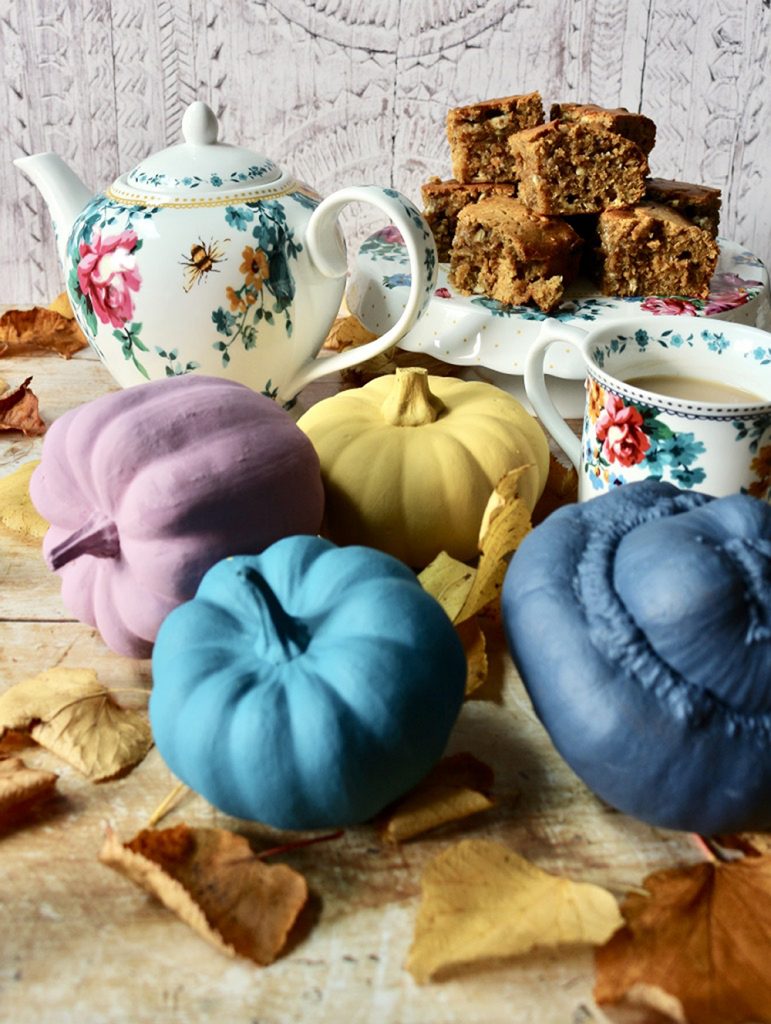 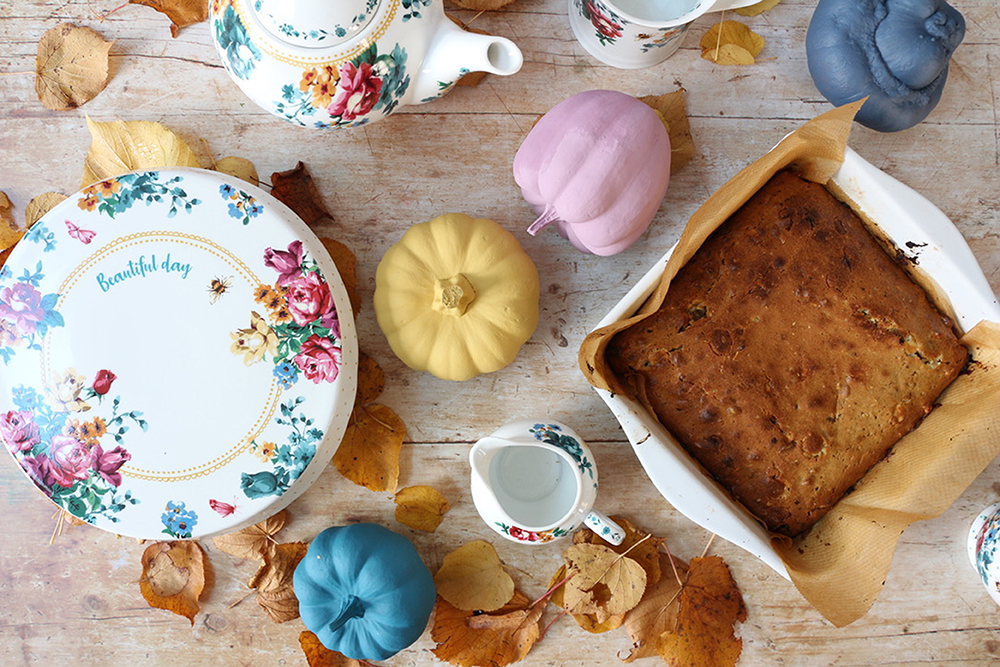